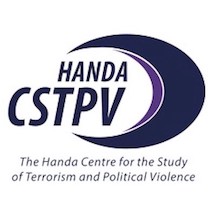 Centre for the Study of Terrorism and Political Violence, St. Andrews University, Scotland

The center is concerned not only with the study of terrorism and related forms of political violence, but also with other nontraditional modes of international conflict including various manifestations of intercommunal ethnic strife, multinational peacekeeping and peace enforcement, and the grey area between political conflict and criminal activity. Its major goals are to investigate the roots of political violence; develop a body of theory spanning its various and disparate elements; and recommend policy and organizational initiatives that the government and private sectors might adopt to better predict, detect, and respond to the threats and challenges of the post-cold war era. The centre's work is largely facilitated through its possession and amalgamation of two of the world's pre-eminent database sources on terrorism and political violence: The RAND-St. Andrews University Databases on Terrorism and Low-Intensity Conflict and the collection of materials on 20th century conflict donated by Control Risks Ltd. Both of these resources consist of newspaper clippings and journal articles from more than 100 countries and in 5 languages. In addition, material from The RAND-St. Andrews databases is also organised in 9 online, specialised computerised "chronologies", where terrorist incidents and other acts of politically-motivated violence are listed in chronological format and coded for rapid data retrieval. The largest and best know of these is The RAND Chronology of International Terrorism. It contains information on international terrorist incidents since 1968 derived from the open literature (as are all the databases); newspapers, journals, published government reports and documents, radio broadcasts, and the foreign press. It provides a comprehensive, independent source of information with which trends in various aspects of terrorism can be analyzed. In response to the governmental, military, scholarly, and public need for such a resource, a Chronology of International Terrorism is published annually.
Visit Site