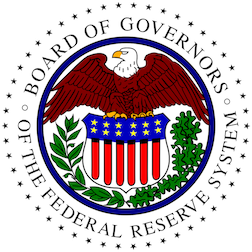 Board of Governors of the Federal Reserve System

The Federal Reserve System is the central bank of the United States. It performs five general functions to promote the effective operation of the U.S. economy and, more generally, the public interest. The Federal Reserve conducts the nation’s monetary policy to promote maximum employment, stable prices, and moderate long-term interest rates in the U.S. economy; promotes the stability of the financial system and seeks to minimize and contain systemic risks through active monitoring and engagement in the U.S. and abroad; promotes the safety and soundness of individual financial institutions and monitors their impact on the financial system as a whole; fosters payment and settlement system safety and efficiency through services to the banking industry and the U.S. government that facilitate U.S.-dollar transactions and payments; and promotes consumer protection and community development through consumer-focused supervision and examination, research and analysis of emerging consumer issues and trends, community economic development activities, and the administration of consumer laws and regulations.
Visit Site