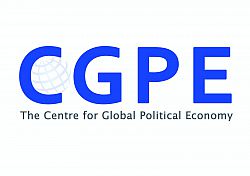 The Centre for Global Political Economy at Sussex was launched in 2000 to fill an important gap in the theory and practice of International Political Economy. Based on the premise that the traditional distinctions between the economic and the political, the domestic and the international, the public and the private, the institutional and the everyday, create a wholly inadequate framework for analysing world structures and transformations, especially within an era of globalising forces and dynamics, CGPE provides a forum for original interdisciplinary research on global politico-economic change. This critical agenda has been successfully carried forward under the directorship of leading scholars of IPE Prof. Ronen Palan and Prof. Kees van der Pijl. The Centre’s current work applies this broad approach to a number of themes of central importance to the contemporary global political economy: including trade and finance; environment and development; labour and social movements. Our regional expertise includes East Asia, Latin America, Africa and India and we have partnerships with many research and activist institutions in those regions.
Visit Site